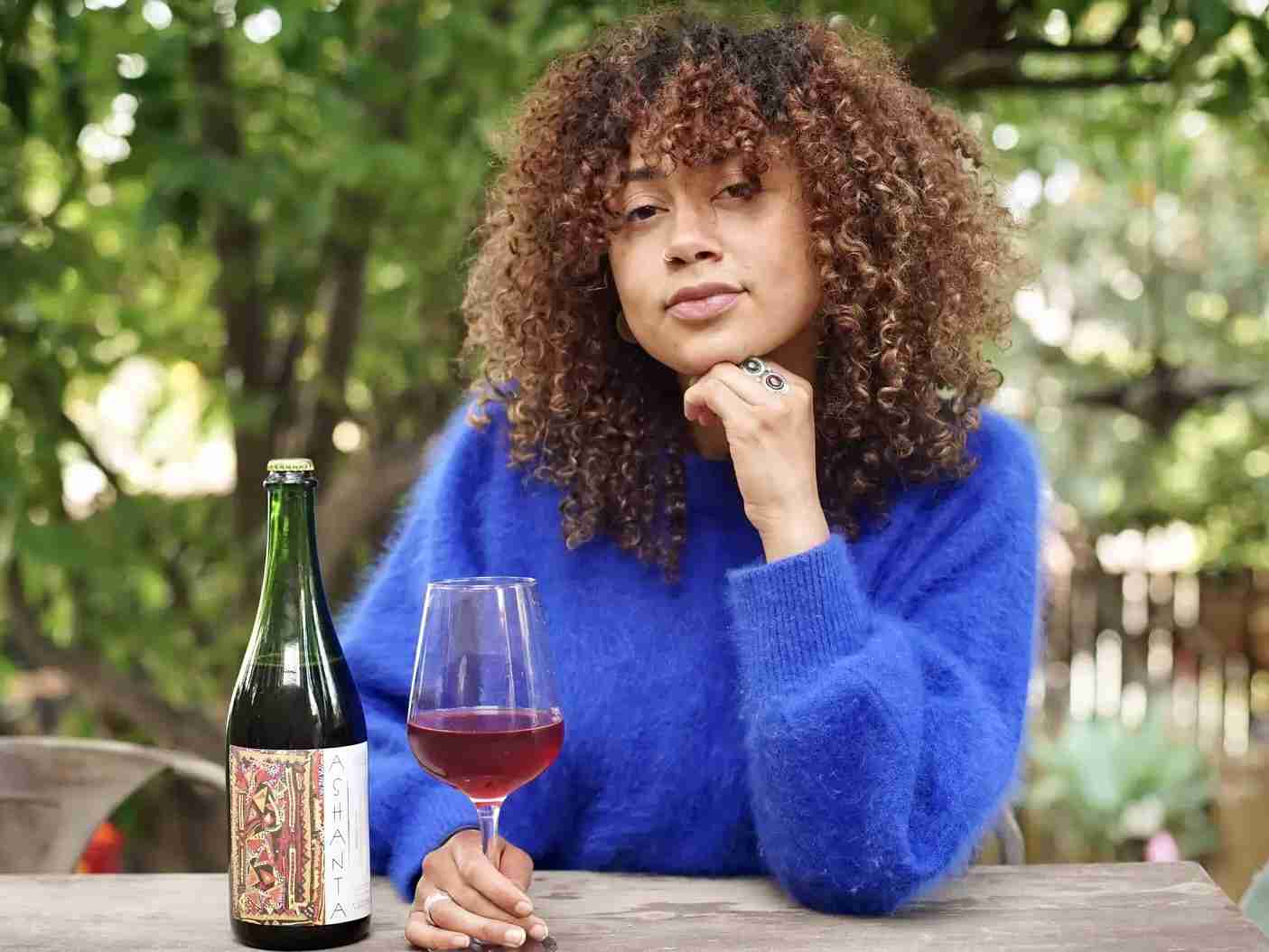 Few things excite us more than wines that have both fascinating backstories and the potential to change the industry for the better. Such it is with California’s Ashanta Wines, from makers Chenoa Ashton-Lewis and Will Basanta.

As a woman of color in a traditionally white industry, Chenoa has made a big impact in a small amount of time, due to her unconventional methods, her ability to flex with California’s inconsistent climate, and her palpable skill for her craft.

Chenoa and Will, partners in work and life, met via the film industry. The meaning behind the name Ashanta is twofold: a blend of the couple’s names (Ashton and Basanta) and a mark of gratitude for Chenoa’s African ancestors — Asante means thank you in Swahili.

Art, nature, and wine are in Ashton-Lewis’s bloodline. Her mission-driven, playful style is rooted in her family’s own legacy: In the 1960s, her grandfather, Stephen, purchased a vineyard in Glen Ellen, California, where he organically grew Pinot Noir and Syrah grapes by day and hosted film festivals in wine caves by night.

In 2017, the Nun’s fire hit the Sonoma area, decimating the majority of the family vineyard; though she was in film school, Chenoa felt pulled to return to her family’s land. She graduated, charged with a newfound appreciation for her grandfather’s winemaking tradition and a desire to learn everything she could from him.

Sadly, Stephen passed away before he was able to pass on his knowledge. Rather than abandon her pursuit, Chenoa leaned into her curiosity, guided by a framework of re-connection. She traveled to Sicily, where Stephen had ancestral roots, working on organic farms, planting permaculture vineyards, and growing six different grape varieties on 350 acres of land above the Mediterranean. By spring 2020, she was back in California – this time calling Los Angeles home. On a fateful trip up north to her family’s land, she discovered 160 fruitful grapevines in her grandfather’s once-scorched vineyard. Newly invigorated, she and Will re-staked the crops, pruned the vines and committed to a fresh beginning.

To further hone their skills, Chenoa and Will shadowed natural-wine pioneer Tony Coturri, sleeping in a tent on a vineyard beneath the Mayacamas mountains and absorbing as much as possible. Under Tony’s wing, they made nine different wine styles, a total of 650 cases, and a few experimental rounds of fruit co-ferments, ciders, and red and white field blends.

“It’s magical to witness for the first time,” Chenoa reflected on watching the first bout of spontaneous fermentation occur. “The journey and connection that I was looking for in Sicily, I found when I went back home.”

Chenoa and Will’s enthusiasm for sourcing from various California’s terroirs – the environmental character of land which influences wine – reflects a commitment to change in the fiery, unpredictable West coast climate. “We are sourcing outside of generally well-known wine regions… expanding out to vineyards far north in Northern Mendocino and far south, five miles from the Mexican border,” Chenoa shares. They’ll pick the last remaining elderberries in the San Gabriel Mountains and collect grapes from the pristine Sierra foothills. For Chenoa, winemaking is a spiritual pursuit. From seeking out optimal grape-growing regions to putting the final touches on the wine, she honors the practice of Zazen, a Buddhist principle of detachment. She doesn’t stake claim to a particular part of California’s land or work with resistance to wildfires or an unsatisfactory crop; instead, she embraces nature’s uncertainty. Ashanta is also committed to a zero-zero philosophy – a sort of gold standard of the natural wine world: no added yeast or tartaric acids, chemicals or sulfur. It’s a resounding yes to native yeast fermentation and strategic attention to healthy soil biology. By being loyal to these philosophies, Chenoa can relinquish control, allowing the grapes to guide her.

Together, Chenoa and Will produce distinctly dimensional, vibrant wines. Calypso, described by Chenoa as “an olive oily Chardonnay,” has a refined, delicate minerality that likely comes from Sonoma’s Dodwell Creek, streaming down the hillside into the vineyard’s soil. Though the ideal way to drink Calypso is on Calypso’s Isle – a  tiny island off of Malta and Gozo, south of Sicily and North of Africa –  the next best option is Botanica’s patio. (Just use your imagination!)

Chenoa shared with us her personal goal: to actively create a future where people of color can shine and show their product. Moving forward, she’ll continue to refine her craft, working creatively with California’s climate and uplifting women of color in this industry. We’re honored to be a part of the journey.

Find Ashanta wines on our wine list and for sale in our market! Visit us Weds-Sun from 9am-10pm.

Representation in a Cup: Bala Chai